After our first trip to the White Mountains in June (Pemigewasset Wilderness and Presidential Traverse) we couldn’t wait to get back! Wade spent time pouring over maps and trail guides to find the best route combinations that would eventually allow us to pick off all of the “4000 footers”. This would be a fairly short trip, but we didn’t want to waste the long weekend. Driving all the way from Nova Scotia meant that we’d have to hike no matter what the weather, so we had a variety of routes planned for various conditions. We made a reservation at a campground that was centrally located within about a 20-minute drive of the potential trail heads, and we were set to go. Our friend Mark was also free, so there would be a third driver. This would be his first time in the Whites.

We left Halifax after work Thursday and headed to Heather’s mother’s house in Fredericton. Staying there gets the first 4 hours of driving out of the way. We would drive to Carroll, NH early Friday in time for hike #1, then hike again Saturday and Sunday before heading back Sunday evening.

After some deliberations on the long, hot drive we decided that Jackson would be the first peak of the weekend. It was a beautiful day and we were hoping to see the views of the Presidential Range that had eluded us in the fog and rain last month. Rather than stick with our original plan of an in-and-out, we thought we’d try to add in Webster peak (although it’s not one of the official 4000 footers) to make a bit of a loop (more like a lollipop really). It was about 2 minutes before 4pm when we arrived at the Crawford Notch Depot / Macomber Family Information Center, which is across the road from the trail head. After using the bathroom and paying for a few last-minute supplies, I asked their hours. “Actually, we’re closed now,” he said, looking at the clock. Phew, we were lucky. He confirmed our suspicion that sunset would be a bit earlier than we were used to in Nova Scotia (he estimated 8:15pm). We knew the “book” time (from the AMC’s White Mountain Guide) for one and two peaks, so we decided just to head out and see what time we arrived at Jackson before making the final decision.

We skipped the 0.2mi detour to “Elephant Head” rock formation on the way up, took a quick peek off Bugle Cliff, and it was a fairly quick climb to the summit. 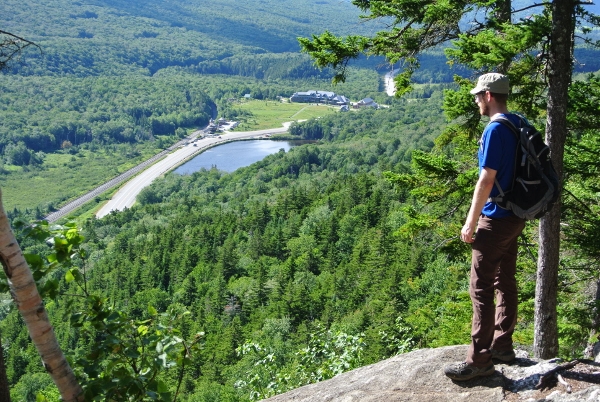 There are a few short technical scrambling sections near the top, though there are views by that point to keep you motivated.

The evening stayed clear and we were pretty sure we would get some great views from the summit. We weren’t expecting a full view of Mt Washington, though!

We spent a few minutes walking back and forth between two cairns to decide which was the true summit. Right after choosing we saw the survey marker which confirmed we’d picked the right one. 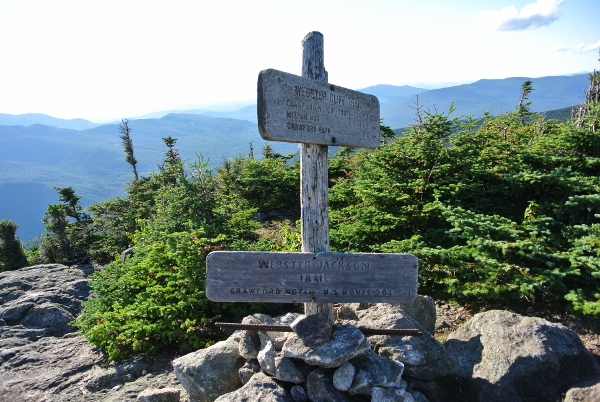 A few more photos and quick consultation with the map and watch, and we decided to push on to Mt Webster rather than heading straight back down. Mt Webster (3910ft) also has a neat view, though it doesn’t compare to Jackson. 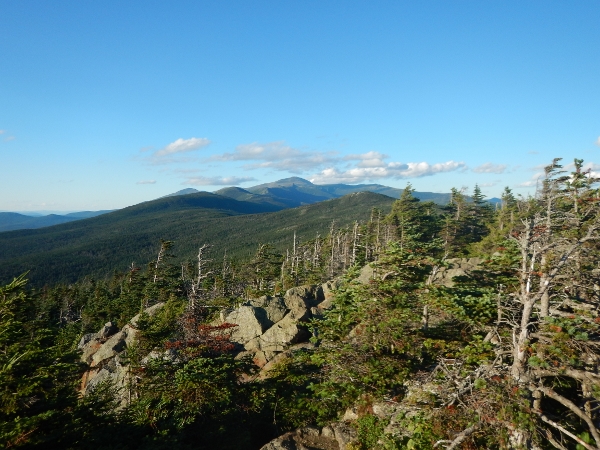 As it turns out, descending this way felt much gentler, though we travelled further. We were pleasantly surprised when we made it back to the trail head with about 15 minutes of daylight to spare.

This was our “storm day” option, as the trail stays below treeline and the views are not considered to be among the most spectacular. We stopped in at the Highland Centre to check the morning’s forecast before making the final decision. It was calling for showers and/or rain with some possible thunderstorms and light hail – nothing that would deter us from this hike. The volunteer pointed out that although thunderstorms are common, lightning (unless specifically forecast) is much less common. Since we were planning to remain below the treeline, we were not concerned.

We were hoping to start the hike from the Willey House Site. A last-minute phone call to Notch Taxi and we were in luck… he could pick us up in 10 minutes and drive us the 6 or so miles up the road. We moved the car across the street to the Mt Clinton Road parking lot and were just finishing the final preparations as the taxi pulled up for the short ride.

The climb up the Kedron Flume trail started out moderate. 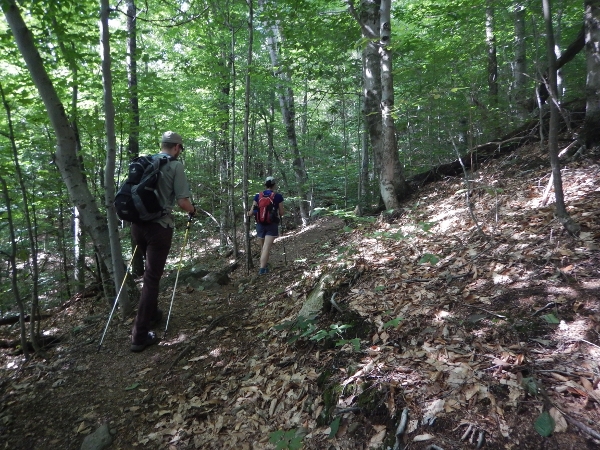 We knew there were some ladders ahead on the Willey Range trail. We had read that many people choose to approach Mt Willey from the other direction to avoid the ladders. We weren’t bothered by them, though they certainly were impressive.

There were multiple ladders covering dozens of feet of elevation gain just below Willey’s summit. From the top of the ladders it’s just a fairly short, though still steep, climb to the top.

The summit itself is viewless, but there are viewpoints very close on either side of the peak.

We stopped only briefly and pushed on toward Mt Field. Despite the clear skies and white clouds drifting slowly by, we know how quickly the weather can change and were hoping to get lunch out of the way before the forecast rain.

As we headed along the ridge toward Mt Field, a few darker clouds appeared. This part of the trail had only a gentle descent then ascent, and we made good time. We arrived just as the skies were darkening. We grabbed a few quick photos and then sat down for lunch.

We’d brought blocks of cheese and salami to share, and knew that this was not an easy lunch to eat on the run in a rainstorm. We alternated between prepping lunch and adding layers of clothing.

Just as we were starting to eat, it started to sprinkle and we could hear distant thunderclaps. The winds stayed low which was nice because there were a few minutes of pea-sized hail.

By the time we’d cleaned up lunch, the sky was already clearing and we were removing layers. Soon the rain gear was all back in the packs, though we could see bands of heavy rain off in the distance. We had been exceptionally lucky!

It was easy going over toward Mt Tom. Even the climb up the spur trail didn’t seem so bad.

Unfortunately, there are a lot of unofficial side “trails” in this area where it seems people have ventured in search of views. We stayed for only a few moments at the summit and headed back down the A-Z trail onto the Avalon trail toward our waiting car.

We packed up camp early. Mt Carrigain is one of the most popular peaks and we were expecting a crowd. Surprisingly, there were only a few other cars ahead of us when we pulled into the parking lot for the Signal Ridge Trail off Sawyer River Road, though two other groups appeared while we were doing the final preparations.

The trail follows Whiteface Brook at the beginning and stays level for the first few kilometers before the fairly sustained climb to the peak.

For the first time in the Whites, there was a point where we were uncertain whether we had missed a turn. Parts of the Signal Ridge Trail have been relocated and at one point we weren’t sure if we should have taken what looked like a trail off to the left. I believe this was near where the Carrigain Brook Road (an overgrown logging road) crosses the trail. However we just pushed on and we it wasn’t long before it became clear we were still heading in the right direction.

Back on track, we started the climb. It quickly turns into quite the slog, with little variation in direction, angle or footing. Luckily we were engrossed in conversation which kept the monotony down.

The trail eventually opens to a short but spectacular ridge with views up to Carrigain’s summit and around to peaks in almost all directions.

We didn’t linger long, though, because the goal was in sight. The final climb was relatively much easier and soon we emerged at the base of the tower. We were disappointed to see a fair amount of garbage and evidence of ‘not-so-stealth’ camping by previous hikers in this area.

The viewing tower was built to replace an old fire observation tower, and what a view!

We were lucky to share the summit with a few other groups of hikers who could help us identify so many more peaks than we could pick out on our own.

After a leisurely lunch break we headed back down to the car, and the 6-hour drive home. Unfortunately all good weekends must come to an end… 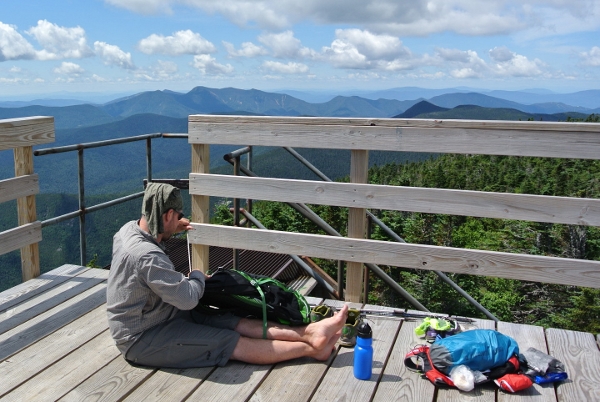 But not before a few last great White Mountain views on the descent!

It was definitely a great day to climb Carrigain! For Wade and I, this trip meant that we were almost half-way, having visited 22 of the 48 White Mountain Four Thousand Footers. For Mark, I think he might have started counting.